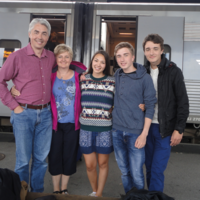 Now we have a picture of all eight of our kids

Two years later my photo is still there

Misha from USA went on exchange to Sweden and shares a special moment she experienced with her host parents.

In the living room of my home, a school photo representing every one of the seven kids was framed and lined up in order by age. My host parents often referred to the photos when we sat for hours on the couches, sipping tea and conversing by the lamplight. After one casual question, "Misha, do you have a photo we could put up there?" - my whole year felt like a success. My photo now stands in between two of my host brothers, lined up exactly like the other seven. "Now we have a picture of all eight of our kids!" was the comment my host mother made. Two years later and my photo is still there.”